On World Health Day, you will certainly read about healthy habits and, for instance, how drinking water is good for your health. While these are all helpful tips and important topics to cover, we decided to take things further. What if you couldn’t drink that glass of water by yourself? That same glass of water that is supposed to be so good for your health? It is daunting to think that this is what may happen to a person suffering from Parkinson’s disease. There are 10 million people in the world suffering from this disorder, which is why, today, we decided to share with you how Parkinson’s Disease can affect mobility and balance, and what can be done when the disorder is detected in its early stages. That is why raising awareness of this degenerative disease is important, and, while there is still much research to be done, we have high hopes that researchers will find a way of reducing the symptoms of Parkinson’s disease, or even find a cure. This is becoming more and more urgent, as life expectancy is rising and the number of individuals with Parkinson’s disease will increase in the future. But is there another solution in sight? 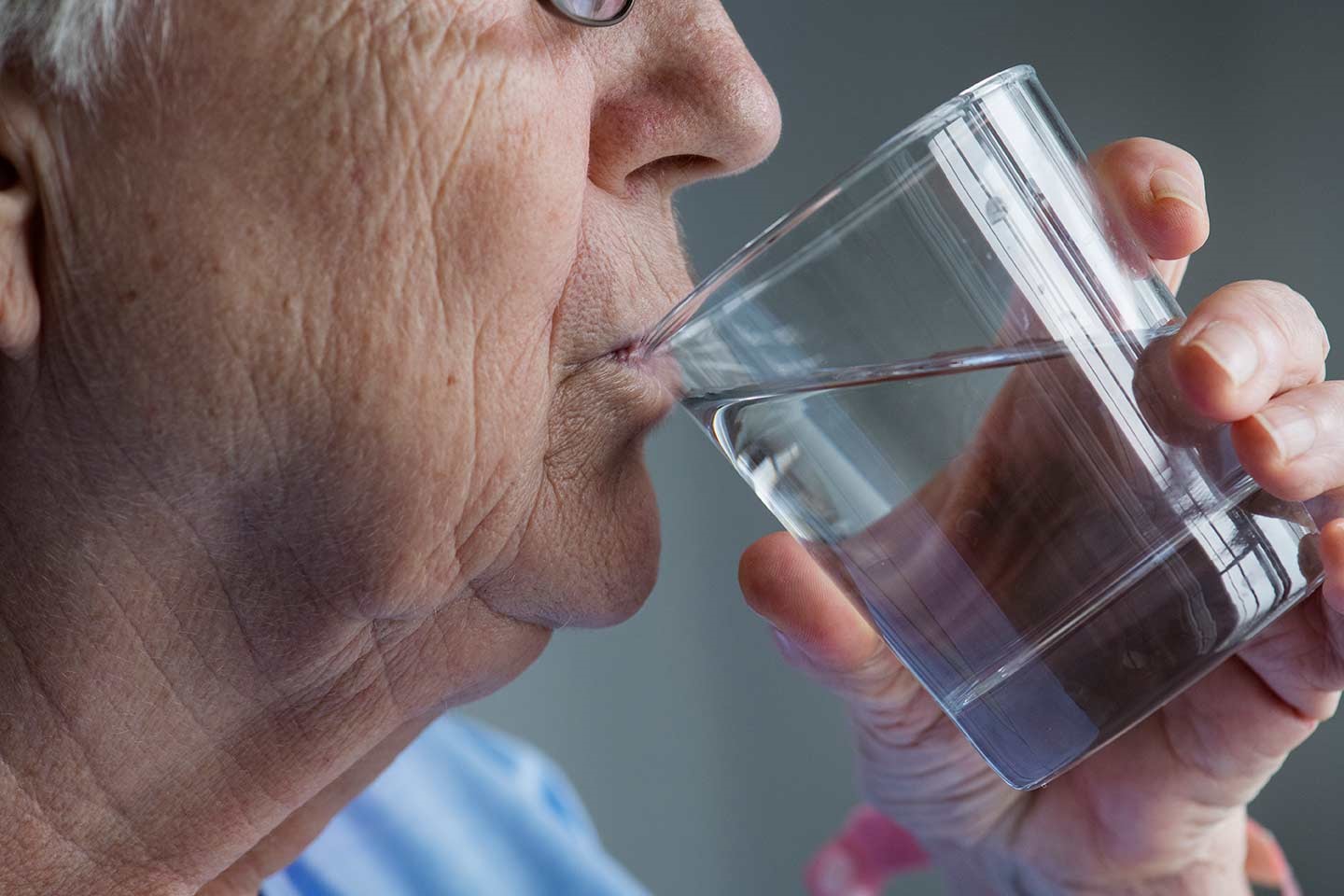 What is Parkinson’s Disease?

Parkinson’s disease was named after the British doctor James Parkinson, who, in 1817, first described the disorder as “shaking palsy”. You may be surprised to learn that it is the second most common neurodegenerative disorder in the world. It is most known for the degree of impairment that it causes, most often leading to fall-related issues due to the progressive loss of muscle control that causes trembling of the limbs and head, stiffness, slowness, and impaired balance, making it gradually more difficult to walk, climb stairs, complete simple tasks or even talk.

What are the causes and symptoms of Parkinson’s Disease?

As a neurodegenerative disorder, Parkinson’s Disease leads to the progressive deterioration of motor function due to loss of dopamine-producing brain cells. While the cause of Parkinson’s Disease is unknown, researchers speculate that both genetic and environmental factors are at play. Studies also show that men are 50% more likely to develop the disorder than women. The Primary symptoms of Parkinson’s Disease:

Some secondary symptoms of Parkinson’s Disease:

How does Parkinson’s Disease Progress?

The Parkinson’s Foundation states there are typical patterns of progression of Parkinson’s disease that can be defined in 5 stages: How can Parkinson’s disease affect mobility and sense of balance?

The neurophysiology of Parkinson’s Disease proves that it affects balance, gait, movement and can actually cause constraints on mobility. But what do we mean by mobility?

Mobility is a person’s ability to move safely in a variety of environments in order to accomplish functional tasks. Functional tasks like drinking a glass of water or eating can become a problem. And if we think about it, mobility is something we take for granted most of the time. We don’t expect to lose it, and we don’t expect to get a degenerative disease such as Parkinson’s Disease. Therefore, being able to maintain good mobility is of utmost importance as we age, and we must take preventive measures to delay mobility impairment as much as possible.

Mobility requires dynamic neural control, sense of balance, and enough agility to be able to adapt to postural transitions as quickly as possible. What also concerns us today is the several types of mobility deficits caused by the progression of Parkinson’s Disease. We need to understand what preventive exercises and preventative measures can be taken to minimise the risk of falls and injury.

While Parkinson’s is not life-threatening, people may experience life-threatening complications, such as choking on food or falling over. We must help our elderly loved ones prevent falls at any cost so that suggested exercise programs can work effectively in combatting the effects of Parkinson’s Disease. Over the last 40 years, Stannah has come across thousands of customers suffering from all kinds of conditions that affected their mobility and ability to use their stairs safely. From our experience with our customers, we know for sure that Parkinson’s disease is one of the most physically impairing conditions and that those who suffer from this movement disorder should be extra careful when using the stairs. Unfortunately, our loved ones often put themselves in danger when trying to get up and down the stairs, often resorting to climbing on all fours – which is not the safest nor most dignifying way to climb the stairs. A stairlift could be the solution for your elderly loved one to safely navigate their house, while providing you with the peace of mind that they won’t fall down the stairs. Find out more about our range of stairlift options here.

How can we reduce mobility constraints in people with Parkinson’s Disease?

Over the last few decades, neuroscience has been providing us with exciting new findings regarding the effects of physical exercise on neuroplasticity (the brain’s ability to make new synaptic connections), neuroprotection and the slowing of neural degeneration. In fact, it has been proven that physical exercise can improve brain function in people with neurological disorders. Physical exercise, like aerobic exercise for example, such as treadmill training and walking programs, have been tested on individuals with Parkinson’s Disease and have been shown to improve gait and quality of life in general. However, the type of exercise should be chosen taking into account a specific program provided by a specialist. The exercise shouldn’t, by any means, put the patient’s physical integrity at risk, especially if the patient is a senior. In order to address complex mobility issues in people with Parkinson’s Disease, a therapist could incorporate tasks such as balance training into the patient’s rehabilitation. These are exercises that challenge sensorimotor control of dynamic balance and gait to improve mobility.

According to a study by Dr. Ergun Y. Uc, of the University of Iowa, the results suggest that

“walking may provide a safe and easily accessible way of improving the symptoms of Parkinson’s disease and quality of life.”

Early intervention in Parkinson’s disease is vital, so that something can be done before the disorder starts destroying brain cells. Although the scientific community is still searching for effective preventative treatments, people with mild to moderate Parkinson’s who do not have dementia and are able to walk independently without a cane or walker, can safely follow the recommended exercise guidelines for healthy adults, which consist of a total of 150 minutes of moderate aerobic activity per week. The research has shown positive effects and benefits in patients with mild symptoms of Parkinson’s Disease. This evidence supports other studies that have shown that the brain has a self-repair and preservation function that can be slightly boosted by doing physical exercise.

Production of dopamine neurons from stem cells: could we be one step closer to the cure?

As the disease progresses, people may experience reduced quality of life if normal functions such as swallowing start to be affected. Currently, there is no known cure for Parkinson’s disease. Once Parkinson’s is diagnosed, the symptoms can often be treated with medications and therapies, especially in the early stages. However, the scientific community is making every effort to find a way to cure, or at the very least find more effective ways of lessening the symptoms of this physically impairing disease. As we mentioned before, the disease primarily affects dopamine-producing brain cells or neurons. The good news is, scientists in Sweden have identified some insights and a set of markers that should help control the quality of stem cells engineered for clinical use to treat Parkinson’s disease. As the disease progresses and dopamine-producing brain cells malfunction and die, it leads to lower levels of dopamine, which is a chemical messenger essential for controlling movement. These findings should help fine-tune stem cell engineering to produce pure populations of high-quality dopamine neurons. Then, a pool of progenitor cells can be transplanted into the brains of patients so they can make new supplies of dopamine cells.

But while this exciting new research is still in the lab, what else can we hope for to delay the symptoms of Parkinson’s and improve the quality of life of those suffering from the disease?

Most people who are diagnosed with Parkinson’s disease do not see a physical therapist until they already have obvious mobility problems. However, it is possible that a rigorous exercise program that focuses on anticipated problems, which are inevitable with the progression of the disease, may help patients who do not yet exhibit mobility problems to prevent or delay them. However, there is still more research to be done on how exercise may delay or reduce mobility loss in patients diagnosed with Parkinson’s Disease, but it looks like moderate physical exercise, again, can boost the regeneration of dopamine brain cells and play an important role in delaying the effects of a very daunting condition for both patients and caregivers.