Up is a story about aging and realizing that life is messy and not something that we can always control. No matter how you look at it, through the eyes of a child or a senior, there are lessons to be learned on how to get the most out of life.

You have to watch this film, especially if you want to share a memorable moment with your kids or grandkids. The experience will create memories that they will take with them into their adulthood, long after they forget their favorite toys.

Why? Because Up goes far beyond what’s expected from an animated movie and grows into a very touching human drama, for all ages. With a light-hearted sense of humour and countless hysterical moments, this movie will show you that just because you’re getting older, it doesn’t mean you have to stop having adventures.

The difficulties of old age are perfectly balanced with adrenaline-charged action and broad comedy. This keeps both children and adults engaged in this timeless, funny tale of adventure and aging.

For those who haven’t seen it yet, we’ll try not to spoil the plot for you – the spoilers section is at the end – but let’s explore some facts and questions raised by the movie Up and see what lessons we can learn from this “UPlifting” adventure!

Eight years have passed since the release of the movie Up, a film that has become a Pixar fan favorite and one of the studio’s most acclaimed features. The somewhat unpredictable hero of the movie is Carl Fredricksen, a widowed man in his late 70s, who suddenly embarks on an adventure with an unexpected little friend.

At the time of its release, an animated film that dealt with the realities of aging was a somewhat groundbreaking idea. How many animated movies do you know that have a senior citizen as the protagonist?

It might be hard to believe, but Up was actually the first ever animated film to open the prestigious Cannes Film Festival in France. Tilda Swinton was the first to applaud the film at Cannes, but soon after, many joined her in a loud ovation.

Up was the second animated movie to be nominated for “Best Picture” at the Oscars (in the non-animated category). The first time this happened was with the 1991 Disney classic “Beauty and the Beast”. Although Up didn’t take home the “Best Picture” award, it did win the Oscar for “Best Animated Film”.

In a youth-obsessed era, Pixar took a risk by giving us an almost octogenarian protagonist in a film aimed at children, but this contradiction is actually the secret of the film’s emotional range and depth.

From Childhood to Old Age. What lessons can we learn? 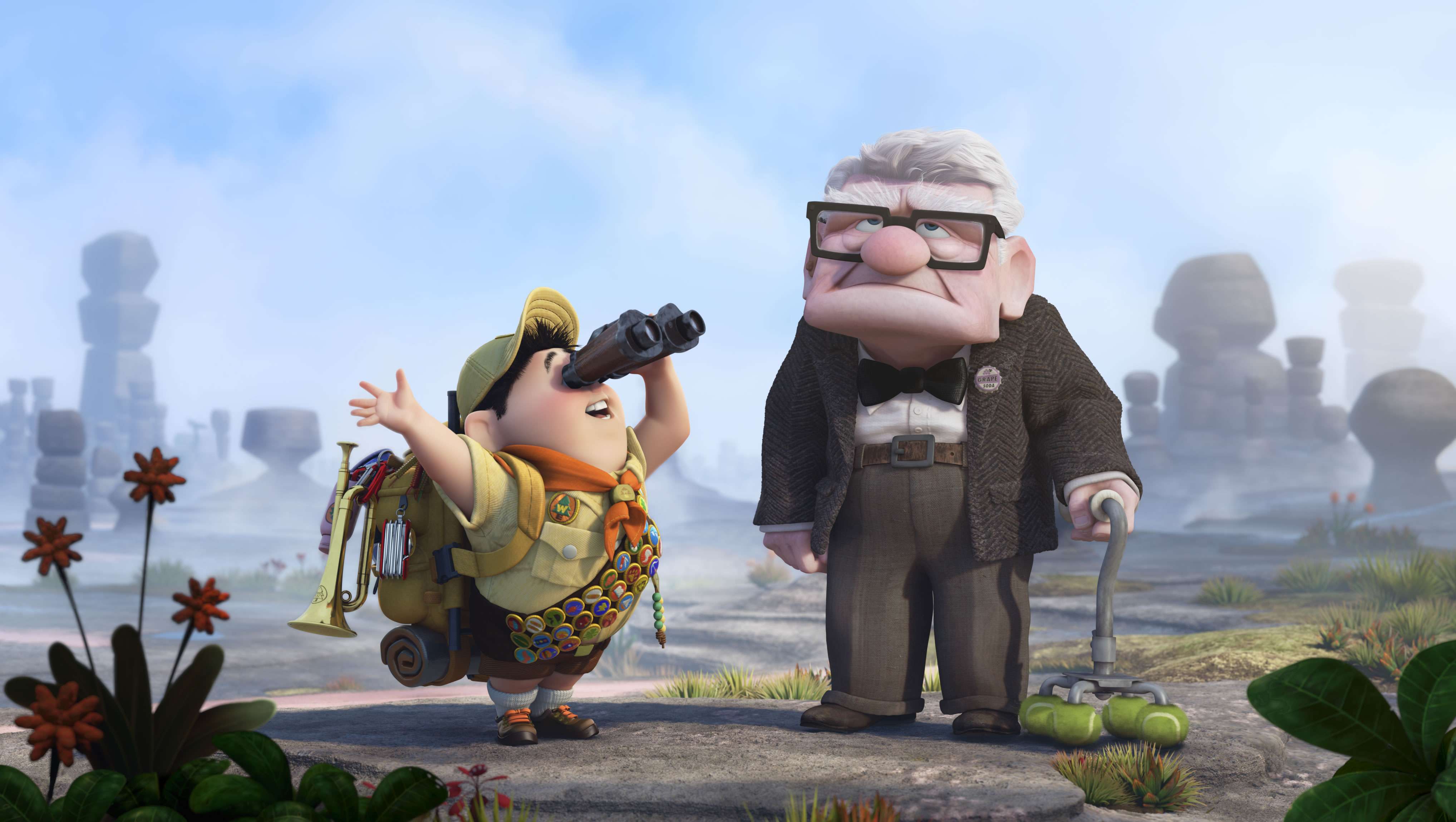 It’s not just a matter of wisdom being passed down from the older generation; one of the most beautiful things about the film is the impact wide-eyed boy scout Russell has on Carl. So much can be learned from the innocence and ingenuity of a child:

This will also remind us of the challenges millennials pose to their grandparents. Since they’re digital natives, they are the first generation who don’t remember life without the internet or a mobile device. Sometimes, interest in modern technologies and new apps comes from the need grandparents have to stay in touch with their grandkids, for instance through FaceTime and Skype.

Home is where happy memories grow Carl has a stairlift at home to reduce the risk of falling down the stairs and stay at home in complete safety.

The Victorian inspired house in Up is a character unto itself and Carl’s reluctance to leave his long-time home stands in stark contrast to the high-speed, highly complex society that is leaving him behind.

This may very well remind us of our parents or grandparents, who may find it overwhelming to think about leaving their homes. They might relate to Carl’s perseverance and desire to cling to whatever independence he can for as long as he can, so he can remain connected to familiar places and things.

This happens for a very understandable reason: they simply can’t let go of decades of accumulated belongings and all the memories attached to their home. That is why aging in place has become a huge trend in Australia and seniors are really committed to staying in their homes.

Your home is where you raised a family. A place full of happy memories. It’s where you belong. In fact, no one should underestimate the emotional impact moving could have. Most seniors will have trouble letting go of personal possessions. They are afraid they will lose the memory if they lose the item. Who can blame them? Holding onto memories is a basic human instinct. It’s like holding onto life.

Some interesting facts about UP

Who is Carl Fredricksen based on?

In this beautifully crafted story, the truth is that not all heroes must be young, beautiful and cheerful. Does this cranky cold face remind you of someone?  Some find similarities between Spencer Tray and Carl’s faces. However, the grumpy attitude will certainly remind many of Walter Matthau, from “Dennis the Menace”. Who is the voice of Carl Fredricksen? Up is among the most beautiful animated movies of all time. And not simply because of its dazzling and dreamlike visuals. The talented voice-over cast and their ability to evoke strong emotions from the audience also play a huge part. In particular, Ed Asner’s excellent performance as Carl Fredricksen was very highly regarded.

To peek at the voice cast for UP, watch this video:

It’s all about UPlifting others and finding purpose in life

Seniors today are not only living longer, but also healthier and more active than ever before. It means that age is just a number and retirement is a new chapter in life, where you still have time on your hands to redefine your resolutions.

Retirement is also considered by many to be the “golden age” of adulthood. This is perhaps unsurprising, as retirees finally find themselves with sufficient free time to pursue the interests that most excite and stimulate them. If you are a retiree or a retiree-to-be, don’t wait, find your passion and pursue it!

This is a time to try a new hobby or learn a new skill. Take a chance on something you’ve never tried before. Since you have the time, why not pursue happiness and share what you love with the people you care about? That’s what Up is all about!

Deeply moving in its emotional range, Up reminds us of Dylan Thomas’ poem: “Do not go gentle into that good night”.

Ultimately, it means that there is still life left to be lived and we should embrace it boldly.

In this section, we will mention some key plot and character details. Mostly, you’ll find loveable characters in this engaging and uplifting adventure, but there are some villains along the way to antagonize them.

Up begins with a delightful montage that traces the relationship between Carl and his wife, Ellie, from childhood to old age. It is a beautiful love story, set to a light-hearted score and mostly told without dialogue. However, things take a sad turn as Carl and Ellie are unable to have children and, after decades of planning for their childhood dream (a visit the Venezuelan waterfall, Paradise Falls, a legendary waterfall that exists only in the world of UP), Ellie passes away before they can make the trip. After Ellie’s death, Carl’s decides to fulfil his promise to her by making the trip to Paradise Falls himself. However, things get complicated when Russell unexpectedly appears in Carl’s life. At first he dislikes Russell, but as his character evolves, he becomes something of a surrogate grandfather for Russell. The villain of the film – Charles Muntz – is a man who Carl and Ellie actually idolized as children. Carl discovers that his childhood inspiration has a very dark side and provides just the right amount of opposition to make Carl’s mission a challenge. With the appearance of the antagonist, the movie evolves into a classic battle, with life and death stakes. Dug is easily the funniest character in Up and plays a key role in the film by leading our heroes through the Venezuelan jungle. Dug’s loyalty and unconditional love for Carl, shows how dogs really are man’s best friends.

The grape soda badge is an important talisman through the entire movie. It has a symbolic meaning about Carl and Ellie’s relationship since childhood, that gains a new meaning or, at least, continuity, when Carl gives it to Russell as a merit badge.

This is a truly inspiring film and certainly worthy of a watch (or re-watch) with the people you care about most. This Christmas, enjoy this uplifting adventure with those closest to you and remember that no matter how old you are, when you give of yourself, things are bound to start looking up!