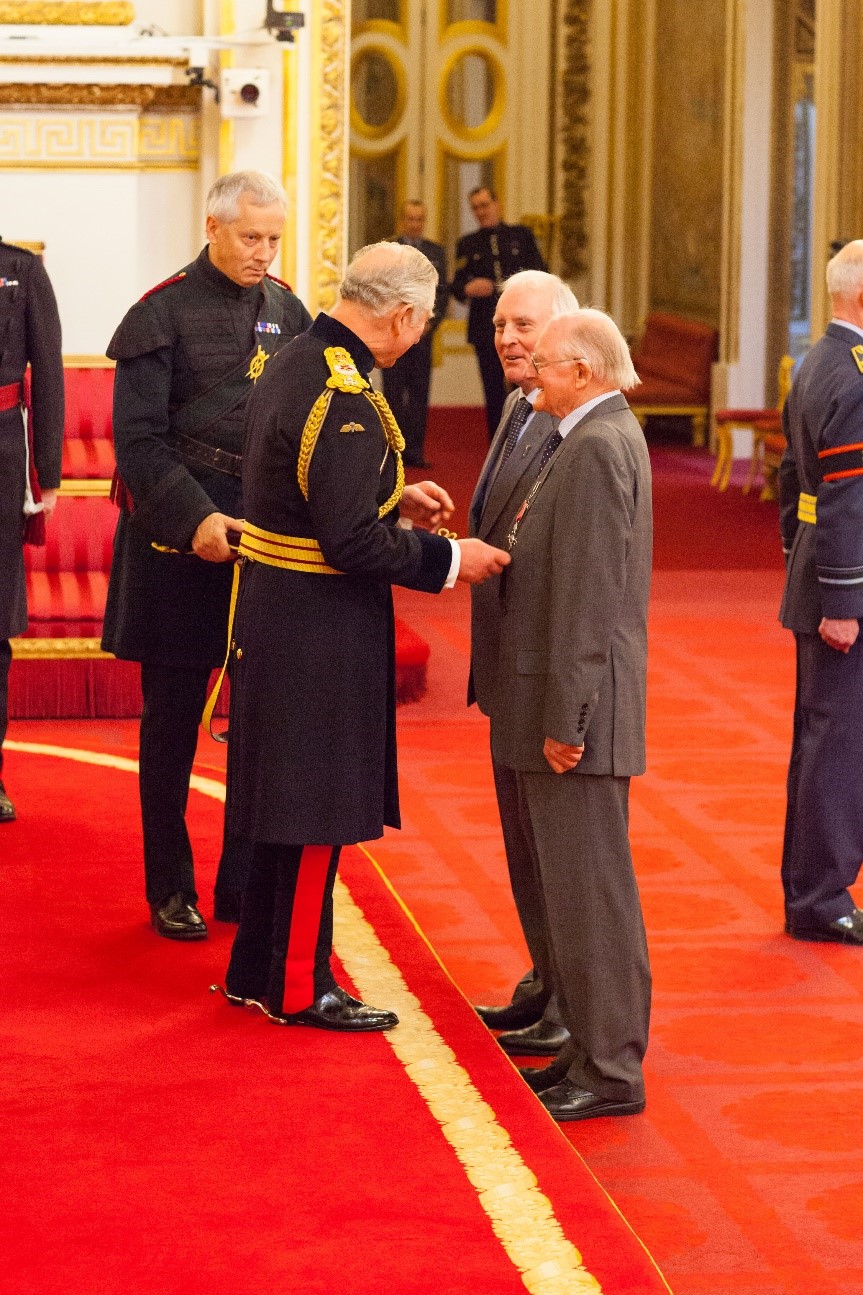 Brothers Brian and Alan Stannah received their MBEs for services to British Manufacturing on the 23rd of November, from none other than His Royal Highness the Prince of Wales. The ceremony was held at Buckingham Palace in the city of London, and the entire Stannah family could not be prouder of this tremendous honour.

Who are Brian & Alan Stannah, the masterminds behind Stannah stairlifts?

MBE stands for: Member of the Order of the British Empire, and it’s quite an honour to receive! The British government gives out these prestigious awards as: “Awards for an outstanding achievement or service to the community. This will have had a long-term, significant impact and stand out as an example to others.”

The elder of the two, Brian Stannah, first joined the family company in 1958 (59 years ago!). Younger brother Alan joined only 3 years later, in 1961. At the time, their father Leslie Stannah was still running the company, and together they worked hard to create the stable, impressive company Stannah has grown into today. Business was hard in the early 60s and it took a lot of hard work and dedication to get Stannah to where it is today. Brian and Alan Stannah were the masterminds behind our famous Stairlift

Having worked together for over 55 years, today Brian and Alan serve as joint chairmen. Their complimentary skills in sales and engineering, has given them the knowledge they needed to get Stannah to where it is today. It was these two men who were behind the production of Stannah’s worldwide product: The Stairlift. In the 1970s, Brian and Alan put all their energy into creating and launching the now famous Stannah Stairlift, and boy, did their hard work pay off! Since then, Stannah has sold almost 700,000 Stairlifts worldwide. The Stannah brothers showed quite a bit of foresight in developing their first stairlift, but they could never have dreamed that their product would reach so many people!

Both brothers started at Stannah as apprentices, a tradition that Stannah still holds today and considers to be very important. Stannah continues to create 10 to 15 apprenticeships each year. Today the business turns over in excess of £200 million a year! The work these men have put into their dream has certainly paid off! Especially because their stewardship has generated a £3.5 Billion turnover over the years. Today, Stannah benefits from the support of the fifth generation of Stannahs and continues to create innovative engineering and manufacturing. “We are deeply humbled to be the recipients of such an honour.”

The Brothers have also spent the past 50 years supporting all kinds of charities, not only in donating considerable amounts of money, but also by giving their precious time. Charities such as: Icknield School in Andover, Alton College’s Building futures Fundraising Appeal, the Jubilee Sailing Trust, Riding for the Disabled and The Prince’s Trust have all benefited from Alan and Brian Stannah’s support.

Stannah’s headquarters are located in Andover in the UK, but the company employs over 2,000 people worldwide (700 of these are at the Andover HQ). The Stannah company has always stood for and has always been respected for our values when it comes to quality engineering and excellent customer service. The Stannah brothers have played an important role in the development of these, first with the British Standards Institute and later with International standards. Alan and Brian’s reactions to the prestigious award were touching. In their statement, they said: “We are deeply humbled to be the recipients of such an honour.  A steadfast commitment to innovation, quality and customer service has been the guiding principles of our family business and are as relevant today as they were when we joined the business. Our hard working and loyal colleagues have been integral to upholding these values over the years, and to them we are truly grateful.”

Brian’s son, Jon Stannah is today’s Managing Director at Stannah, and also wanted to comment on this very special occasion where his father and uncle were honoured in such a special way: “Stannah this year celebrates its landmark 150th year thanks to the entrepreneurialism and dedication of our Joint Chairmen, Brian and Alan.  Their MBEs are richly deserved and we are tremendously proud of their incredible achievements, both today and over the course of their 50 years with the business.”

We at Stannah couldn’t be prouder of these two brothers who dedicated their life to fostering excellence at the company that bears their name.